Push To The Bush for ANZAC Day

Push to the Bush is an initiative created by Rod & Pam back in 2006 which takes the Spirit of Anzac Day out to School Children living in remote and rural communities.

It started in 2005 with one destination, a little place called Wyandra in Western QLD with seven Veterans and seven School Children. Over the years, more veterans visited Standown Park and became aware of this amazing trip that was bringing such spirit and history to small communities.

In 2016 we had a total of 67 Veterans who visited six different towns in organised groups and visited 15 different schools. This is a self-funded trip by the Veterans (AKA excuse for a holiday) and they take out their own memorabilia, props and stories. Together with the School Principle and co-ordinators, the Veterans set up a mini museum to show the children what was experienced in that time. It is a week-long celebration and the whole community township and neighbouring properties come together and have a great time.

The Veterans get to experience the admiration and respect from the students, their parents and the whole community for bringing this event to them, whilst the community gets to experience all the activities the Veterans bring along such as: Concerts, Live Entertainment, School Talks and a Sports Day with the kids.

Standown Park have multiple fundraising events throughout the year to raise funds for the Push to the Bush venture.  During our trip we may run raffles and any funds raised go to Angel Flight, Royal Flying Doctor and the participating Schools.   In 2017 we were able to give every child a new backpack, water bottle and other items which are a direct result of the generosity of the people who support our events.

In 2018 a wonderful group on craft Partners of Veterans made 80 tiny care bears which we took out to the children of Jericho, Augathella and Muttaburra schools.  They were so gratefully received by the children many of them just carried them with them where ever they went.  Thank you to Maureen Rays for organising the special bears.     Maureen also organised a bear for each of the students at Jundah school in 2019.  This year 2021, over 100 bears went all over including the school children on Norfolk Island.

Our thanks to the Augathella community for their support and hospitality of the visiting Veterans and partners.  They are especially appreciative of the extra power points installed in the grounds last year, making life easier for them during their stay.

In 2020 our numbers were up to 72 Veterans plus partners wanting to join the Push to the Bush, so looked at going to Augathella (of course), Aramac and Wyandra.  Unfortunately this trip was cancelled due to COVID-19 but we were still able to send the bears out to the children of the towns.  Some of the Veterans even conducted Zoom calls to the classes.

Thargominda, Eulo, Wyandra and Augathella were the towns visited this year [2021] by 43 Veterans and partners.  We all had an amazing time which was so rewarding all round.

As a guid, each year we leave Standown Park on 15th April.  Some people leave with us but most do their own thing.  Everyone is welcome to tag along or meet up along the way or at the designated town/s.  You don’t have to be military, all supporters are welcome.    The people of the west just enjoy visitors and as we try to buy most items in the town, we give a bit back to them that way.

If you are interested, give Pam, Rod or Zoe a call  07 5486 5144, and you will be put on the list to be contacted  once the new school principals of the chosen towns are contacted.  We don’t go out there to take over, but to join in the towns activity. Call us . 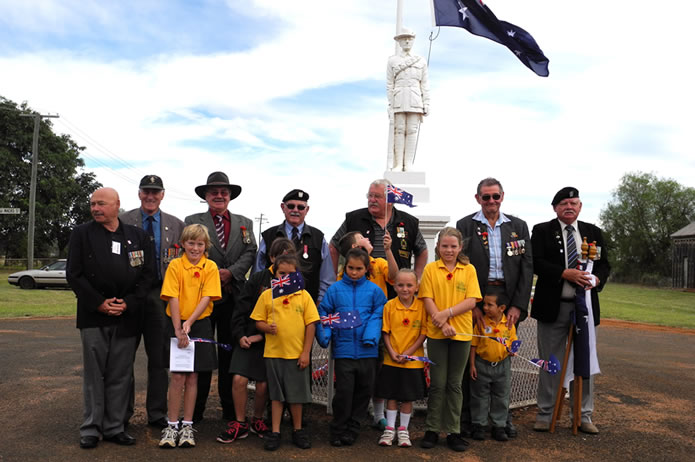